The Art of Golden Repair: Youth, Police, and Horses Upend the Politics of Care

Kintsugi is the Japanese art of golden repair. It is the centuries-old practice of fixing broken pottery by filling in cracks with seams of gold dusted lacquer. The newly recreated piece transcends brokenness by rendering the memory of its wounds in precious metal. I write here, then, not about how the world is breaking, but rather a meditation on how to create the potential for golden joinery.

The context is my art project, No Such Place as America. I initiated the piece with Pat Kelly, a self-described African American cowgirl, and founding president of Ebony Horsewomen, Inc. (EHI) in Hartford, Connecticut, which uses equine-assisted therapy, horsemanship training, and educational programming to foster leadership and academic advancement amongst local youth. EHI used to share their site with the Hartford Police Department’s (HPD) mounted patrol, which facilitated a shared sense of purpose amongst the two groups. In the past three years, as HPD’s relationship with the community has become increasingly tense, the nearly bankrupt city of Hartford dismantled this unit.

In response to a challenging relationship between a largely white police force and a mostly African American community, Pat, the EHI teens, and I invited HPD’s newly constituted group of Community Affairs officers to work with the youth on a series of equine therapy workshops. Pat’s hope is to make the community safer for her kids. My impetus is this impossibility: any world we create that is overseen by armed groups of law enforcement officers is one with grave and potentially life-threatening power imbalances. No art project can rectify this imbalance, but art can create a space apart that offers the possibility for change. What happens if we reposition conflict mediation as a form of care?

Questions of care were very much on my mind as I approached the project. Social bias and economic constraints often limit social imagination, and may affect our assumptions about who might bring valuable expertise to processes of care, how, and what possible forms that care might take. How might we upend assumptions about who has the credibility to design social constructs of care? If the outcome is meant to help in deconstructing power imbalances, can that begin by structuring the process as an equal exchange?

Sometimes care is more associated with affect than actual recuperation. What if we shifted the understanding of care as mainly being an unseen act of service to something different? Not a one-time patch or singular upgrade that would soon need to be reprised; but a continuous, ongoing, preemptive un-breaking and continual re-configuring toward the change we want to see, aligned with the poetics of imagination and play?

There are several pitfalls in conceptualizing care. Shannon Mattern notes that care can be romanticized; not every effort that is seemingly well-intentioned has positive impact.1 Some approaches to care are conceived through colonialist ideologies, paternalism, and design savior-ism, such as certain types of humanitarian aid, fundraising galas, and “hack-a-thons.” Miriam Ticktin writes about humanitarian causes that structure beneficiaries as being victims of biology or fate, and who in their victimhood are somehow “less than.”2 Social bias notwithstanding, beneficiaries of aid, i.e., people at their most vulnerable, are often used as political pawns. One need only consider people seeking asylum at the US-Mexico border, or state workers during a government shutdown.

As a society we make hierarchical assumptions about who designs and initiates maintenance infrastructure versus who actually does the work, or who is the “humanitarian benefactor” versus who is assumed to be the less powerful recipient. Distinctions between these practices are often shaped by constructions of power related to race, gender, class, and other political, economic, and cultural forces. To maintain and initiate care can be time and resource intensive, and thus may in fact be more possible and easily leveraged by those with privilege.

Ebony Horsewomen is located in North Hartford, CT, at the edge of Keeney Park. It’s an incredible place with gardens and horses, improbably yet most importantly located in an urban center. The animals and grounds are mainly cared for by local teens, who volunteer to come daily. Those in the organization’s Junior Mounted Patrol and competitive dressage groups often stay for years, and over the organization’s thirty-year history, have maintained 100% high school and 90% college graduation rates.

Like many police departments throughout the country, Hartford’s Police Department struggles to maintain a positive relationship with the community. On the one hand, several officers are long-standing community organizers from the neighborhood, working with groups such as My Brother’s Keeper. On the other hand, in October 2018, the city fired an officer who was filmed telling a group he felt trigger-happy.3 Though disconcerting on several levels, the event did lead to the department restructuring its team of community service officers to now include several people working with local grass roots organizations.

No Such Place as America begins with local youth of color participating together in equine therapy workshops with two groups who are socially charged with their regulation: police officers and school security officers (SSOs). The workshops are geared toward stress reduction and building trust through non-verbal communication. A central outcome is for the youth to advise on a workshop curriculum that might continue to be offered by young people at EHI for other Hartford teens and officers.

In this working group, the people with expertise did not conform to usual assumptions about who originates civic infrastructure projects. The sessions take place on the home turf of the young people, teens of color, who along with the horses, are both (quite literally) caregivers, and in the context of equine therapy and the grounds of EHI, are in a position of mastery.

The young people at EHI are very much in need of care themselves. Many come from extremely high-stress environments. At fourteen to sixteen years old, they are well spoken, with a quiet sense of confidence. They are used to people thinking they’re lying when they say that they ride horses, as they don’t meet some people’s assumptions about what equestrians should look like. On a daily basis, all year round, they willingly, lovingly, care for the horses; not only feeding and grooming, but laboring in the cold, and mucking stalls. They discuss the bond they establish with particular horses, and quite literally, how the horses care for them. 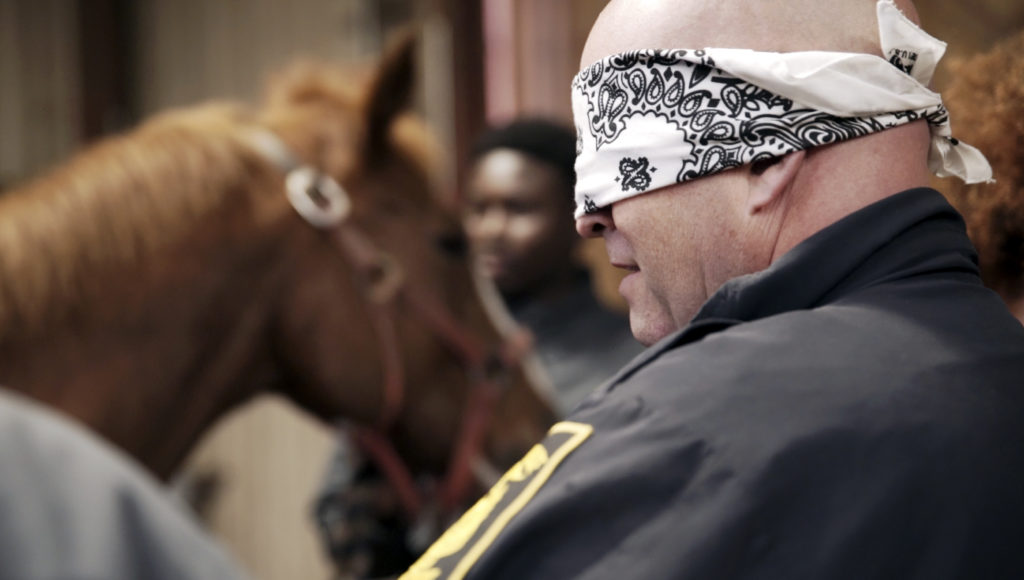 Equine therapy exercise at EHI from artist Melanie Crean’s project No Such Place as America. Photo by Melanie Crean.

The other experts in the working group are indeed the horses. Human participants are currently developing trust and communication, as somehow mediated by their equine partners. Pat says equine therapy works because it doesn’t require conversation. Being prey animals, horses have acute sensory awareness of what’s going on inside the other animals around them. This is particularly helpful for people who have experienced trauma, which is often difficult to access or describe with language. Horses are basically like huge mirrors: if you’re anxious, they’ll become skittish and move away, but as you start to relax, you are rewarded with them responding to you, which leads you to continue to self-regulate, probably without even realizing it.

In Hartford public schools, SSOs are socially charged with regulating teens’ behavior. Beyond discipline, a big part of their job is helping young people reset after difficult experiences so they can focus on learning. Andrew Woods, the Executive Director of Hartford Communities That Care and our liaison with the SSOs, described the situation: kids who have experienced trauma are often in a continual stress response state of fight or flight. Helping them self-regulate, especially in school, is one of the few ways to stop this cycle. Many SSOs and social workers have experienced trauma themselves. In the week I met Andrew, he had spent two nights in the emergency room assisting families after gun-related homicides, which he said was unfortunately not an uncommon experience.

Hartford police involved in the working group include former veterans, who have reported going directly from police training to military boot camp to Iraq, and then back to the Hartford force. Others describe going from intense scenes of domestic violence to a traffic stop within a span of five minutes, without time to wind down. It did not go unnoticed that these patterns of being in a state of continual stress response have unfortunate similarities with the young people.

Beyond being simply therapeutic or educational in the context of the workshops, the idea of care as discussed here comes into play if and when the sessions both complicate and further relationships. This happened last fall in an exercise which required the officers to be blindfolded. Though tense, they allowed this to happen without pause. In later discussion it came out that they never operate without one of “their own” having eyes on a situation; a clear echo of experiences in the armed forces. They described themselves as being both incredulous and grateful for the blindfolding experience, which they said would never have happened anywhere else.

What then, of golden joinery? At the end of each session, the group synthesizes the essence of what has happened that day in a series of tableaux, often related to self-protection, security, and control. In the spring, we will expand on these tableaux to create a series of short performative videos, moving beyond the functional nature of repair, to metaphor and the creation of something new.

Though still very much in process, our working group is addressing various aspects of the “who” and “how” of power relations involved in acts of civic care through the improbable combination of young people, law officers, and horses. Throughout the work, my considerations about care have continually come back to the art of acknowledging the trauma of the break, and considering the various potentials of reframing it into poetry. Many questions remain. Care requires a foundation that goes beyond communication to establish and maintain trust, but this foundation is only a beginning. Those who maintain also require care. True care can’t be a series of band-aids; it must be continual and generative. For now, however, in the presence of the horses, I am reminded that a sense of unspoken harmony amongst the group is a good place to start.

2. Ticktin, Miriam. Casualties of Care: Immigration and the Politics of Humanitarianism in France. Berkeley: University of California Press, 2011.

Melanie Crean is an artist, educator, and filmmaker whose work explores how representations of power can be equitably shifted in media, culture, and technology. She is an associate professor at Parsons School of Design, teaching courses on emerging media, social engagement, and visual culture. Previous work includes directing the production studio at arts nonprofit Eyebeam; managing animation and motion capture teams at MTV’s Digital Television Lab; and producing documentaries in Nepal on the effects of women trafficking. Crean has received fellowships and commissions from Art in General, Creative Capital, Creative Time, Franklin Furnace, No Longer Empty, Performa 11, and Rhizome.