‹ Back
Magazine
View all of Issue 3: "Artists Challenging Normativity" 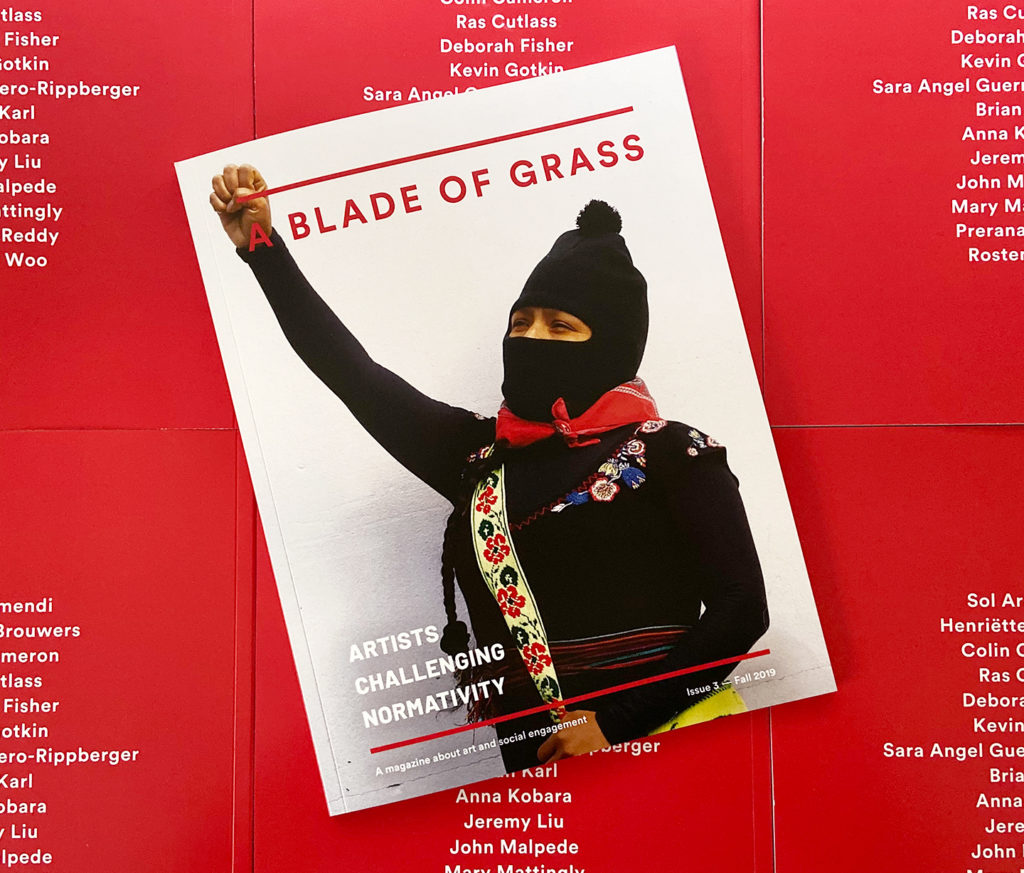 In this issue, we’re looking at how socially engaged artists are challenging mainstream habits of seeing and doing that exclude the lived experience and creative potential of large swaths of people who do not fit into—or rather, who have been systematically oppressed by—the social norms and physical expectations of capitalist society. Rather than view difference in negative terms, these artists are using their work to affirm physical, sensory, emotional, and cognitive difference as “to be expected and respected on its own terms as part of ordinary human experience,” as Colin Cameron wrote in a 2001 article on Disability Arts that we are reprinting in this issue. Our goal is to highlight how socially engaged art can reframe the disabling gaze of normative society towards an exploration of the liberatory possibilities of those at the so-called “margins”—both as affirmations of their own creativity and wisdom, and as strategies for transforming societies to become more just and inclusive.

Issue #3 begins with Philadelphia-based artist and social worker Ras Cutlass, who writes poignantly about the ways her community’s experience of violent structures such as psychiatric institutions and foster care led her to develop the concept of a “mind space” as a visualization of the psychic self. She has since developed workshops using science fiction and Afrofuturistic creative processes to help people learn how to accept their own mental structures, regardless of the characterization or stigma they receive in the mainstream world.

Kevin Gotkin, the Co-Founder of Disability/Arts/NYC Taskforce (DANT) writes about his skepticism that arts and cultural institutions’ current growing interest in presenting disability artistry will result in a true transformative movement for disability justice. This criticality led DANT to engage in sustained cultural policy work to support emerging disabled artists as well as to convene two “boot camps” in collaboration with Gibney Dance to train a cohort of cultural leaders to advocate long-term for disability equity in NYC.

Brian Karl’s examination of Gregory Sale’s Future IDs at Alcatraz project highlights the ways incarcerated people are visualizing aspirational roles for themselves to confront a society that is largely unwilling to see them as anything but criminal, and setting them up to fail when they return by discriminating against them in areas such as housing and employment. Furthermore, the project challenges Alcatraz’s tourists—most of whom are there to hear stories about the prison’s most infamous inmates—to empathize with the humanity of those who have endured the misery of prison and other punitive social institutions, and hopefully to change them.

Similarly ignored or underrepresented, particularly in plans for neighborhood development and “revitalization,” is the homeless population. John Malpede and Henriëtte Brouwers of the performance group Los Angeles Poverty Department have long been working to create and preserve a vital community with necessary supportive services in Skid Row. They are partnering with designer Rosten Woo and researcher Anna Kobara to organize residents to boldly challenge the city’s planning department to not only prevent displacement of current residents, but to go even further. They hope to harness increased tax revenue from gentrification to also build housing for the 7,000+ low-income or homeless residents living on the streets. We’ve asked Jeremy Liu, a community development professional at PolicyLink, to engage them about how their efforts upend traditional assumptions about how to finance extremely affordable housing—and, contrary to popular wisdom, why there is value in maintaining a community of and for low-income residents.

In this era of rising xenophobia and scapegoating of immigrants for economic transitions that are shrinking the American middle class, we look back on artist Sol Aramendi’s sixteen years of socially engaged art practice in a conversation with transnational arts researcher Sara Angel Guerrero-Rippberger. From her position as an immigrant artist, Aramendi uses lived experience as the departure point for an exploration into counter-systems, building collaborative artworks around resistance and solidarity. Her projects allow her collaborators to affirm their own powerful subjectivities through the intersection of socio-economic status, language, labor, gender, sexual identity, body politics, critical pedagogy, and immigration status.

We’re also bringing back our advice column feature, where an A Blade of Grass Fellow responds to readers’ questions regarding their socially engaged art practice or a related challenge. In this issue, Mary Mattingly, whose work imagines bold solutions to the challenges of climate change and militarism, answers questions about how artists can respond when they feel limited by the roles their collaborators or communities assign them. A Blade of Grass Executive Director Deborah Fisher also returns with the second installment of her series on how art institutions can evolve to play a more central role in social and political life. She wonders if a nuclear reactor might be an apt structural metaphor for how arts institutions need to be restructured and governed if they are to successfully hold critical and constructive dialogue in an increasingly over-reactive and overheated cultural moment.

We hope this magazine issue demonstrates how socially engaged artists and the communities they work with are actively moving beyond dominant languages and institutions, demanding not only to be heard and accepted, but leading the charge for dismantling the ossified, risk-averse norms that keep re-creating inequity and despair. Those on the margins are breaking free of the cages of society’s limited imagination, and we need that imagination if we are all to flourish in the future.

See more articles tagged:  EquityNormativity
More Articles Like This One