Who Makes Socially Engaged Art?
Introduction to A Blade of Grass Magazine Issue #2 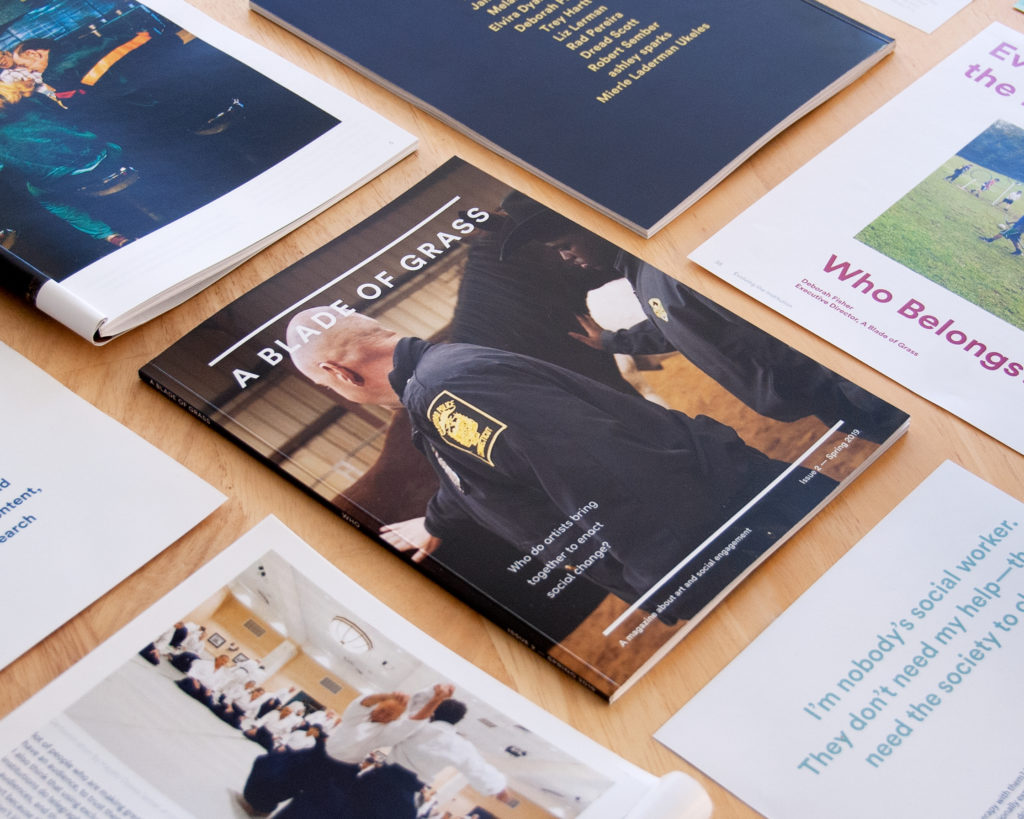 The beating heart of a socially engaged art project is the web of relationships that it brings together. Artists find fresh ways to interact with people who compel them and complement their own aesthetic expertise. Artists can often point to an experience that awakened their desire to partner with someone not centered in the art world but rather in the throes of an issue or power imbalance they want to address. Such artists may become allies to and co-authors with people whose expertise comes from another source than art. Or, the artists may be able to compassionately challenge perspectives that they disagree with because they are held by people they care so much about.

Issue #2 begins with a conversation about partnerships between three artists and staff/constituents of three New York City municipal agencies—Mierle Laderman Ukeles with the Department of Sanitation (DSNY), Rad Pereira with foster LGBTQ+ youth in the Administration for Children’s Services (ACS), and A Blade of Grass Fellow Rachel Barnard with officers and clients at the Department of Probation. Ukeles’ Manifesto for Maintenance Art 1969! Proposal for an Exhibition “CARE,” 1969, made a profound connection between women and sanitation workers as the people charged with taking care of the world on a somewhat invisible, day-to-day level, setting off a forty-plus year partnership with DSNY. Her identification with san men (and the few san women at the agency) led to large-scale ballets performed with garbage trucks, inspiring a new chapter in Ukeles’ art making and bringing more public recognition to the people who clean NYC streets. Ukeles inspired NYC’s Public Artists in Residence program (PAIR), which since 2015 has embedded artists in various agencies. We hear briefly from Rad and Barnard about their very recent PAIR partnerships. 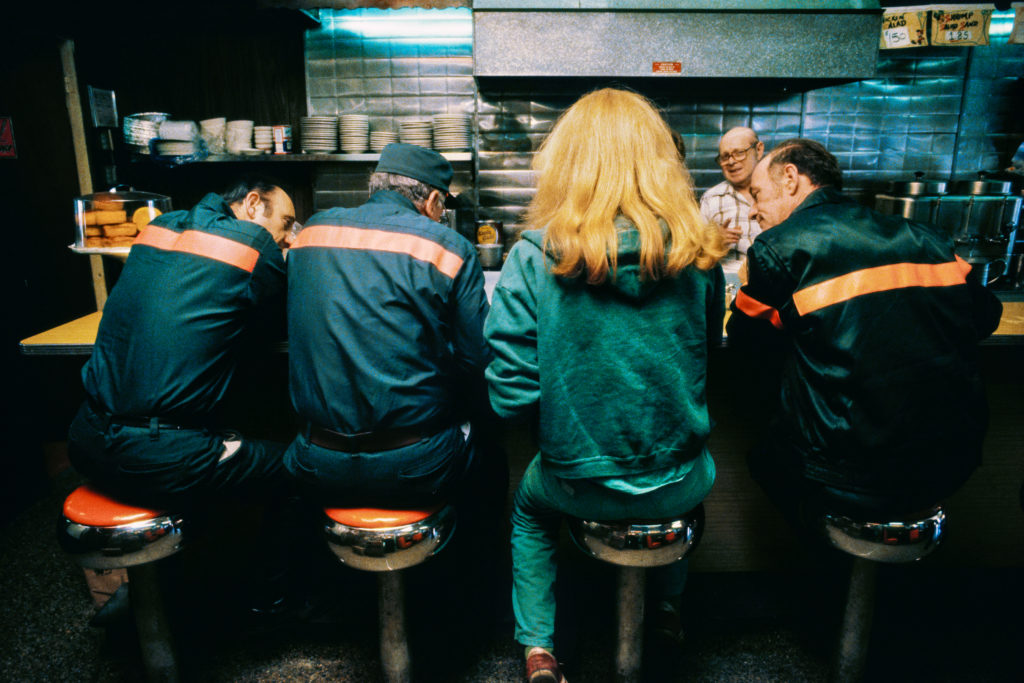 A Blade of Grass Fellow Melanie Crean muses on the politics of care in an essay about her partnership at Ebony Horsewomen, Inc., a stable in Hartford, Connecticut founded by social organizer and self-described African American cowgirl Patricia Kelly. Crean and Kelly bring together African American teens who care for the horses, officers from the largely white Hartford Police Department, school security officers, and the horses. Through an equine therapy workshop, they are reducing stress and building trust through non-verbal communication.

The issue of care echoes through my interview with Elvira Dyangani Ose, Director of London gallery The Showroom, about the role of the curator in socially engaged art. She reminds the reader that the Latin word for “curating” or “to curate” is curare, avere cura, “to take care.” She links that idea to The Showroom’s work with artists and local residents and organizations, paying attention to the art institution’s relationship to the people who live around it.

Picking up the theme of the artist’s relationship to the people and the place that surround them, Robert Sember writes about A Blade of Grass Fellow Brian Harnetty, who returned to his Appalachian home after graduate school in London, where he’d been urged by his music professor to listen to the voices of fellow Appalachians. Harnetty went on to make sound compositions integrating the natural and human voices of that region. In Forest Listening Rooms, Harnetty engages Appalachians on different sides of the extractive industries debate, providing a context to experience together their relationships to the forest as a living entity.

Also responding to deep, lifelong relationships, A Blade of Grass Fellow ashley sparks created and developed Good Old Boys, a play and participatory dialogue focused on southern white male identity made with and for her family and their friends in rural Virginia. Although she is on the other side of the political spectrum, her care to understand her people motivated a work that, though challenging, is infused with humor and warmth. Excerpts from sparks’ script are embedded in Trey Hartt’s narrative about the project.

With an emphasis on belonging, A Blade of Grass Executive Director Deborah Fisher launches a series on art institutions in our times, positing an ideal relationship between them and their audiences as a mutually supportive “virtuous cycle.” She looks at obstacles to the smooth functioning of this cycle and introduces a fascinating range of cultural models that carry out a more satisfying and reciprocal relationship with their audiences and participants.

Our reprinted essay in this issue is by choreographer Liz Lerman, who in the mid-1970s lost her mother to cancer and felt such a need to be with older women that she created a dance company with women ages nineteen to ninety. She is among the pioneering artists who have integrated people into their professional work for reasons of their lived experience rather than technique. A Blade of Grass Fellow Dread Scott is the guest respondent in our Ask an Artist advice column, taking questions from readers about who makes socially engaged art: ought socially engaged artists try to make organizing more creative or focus on activating artists? How can socially engaged artists be part of conversations and actions related to issues facing communities that are not directly their own?

The artists featured in these essays are enriched by the sometimes surprising people with whom they collaborate in order to make the art that calls them. For them, being artists is not forsaking all others, reminding me of one of the etymological sources of art, the Latin root artem, “to fit together,” like bringing individuals into connected entities—army (if for an unfortunate purpose), or better yet, “harmony.” The artists in this issue make worlds, or at least projects, where they fit together people who are often kept apart. They provide illuminating responses to the elemental question of “who” is needed to make socially engaged art.

Jan Cohen-Cruz, Director of Field Research for A Blade of Grass, was director of Imagining America: Artists and Scholars in Public Life (2007–2012) and co-founder and editor of its journal, Public. A longtime professor at NYU Tisch School of the Arts, Cohen-Cruz taught applied theater and produced community-based arts projects. She received the Association for Theatre in Higher Education’s Award for Leadership in Community-Based Theatre and Civic Engagement (2012). Jan was evaluator for the US State Department/Bronx Museum cultural diplomacy initiative smARTpower. She wrote Remapping Performance, Local Acts, and Engaging Performance, edited Radical Street Performance, and, with Mady Schutzman, co-edited Playing Boal and A Boal Companion.