A conversation with special guests: 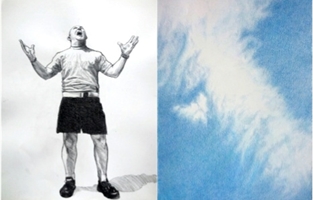 Coming home is a challenging process for many soldiers returning from Iraq and Afghanistan. Wounds both physical and psychic pose daunting challenges for even the strongest-willed soldiers and their families. Developed in part during a residency with the USO, and in collaboration with soldiers and veterans, Brookie Maxwell’s “Coming Home” project provides a context for military and civilian participants to dialogue about the process of homecoming, ranging from how we care for soldiers who’ve experienced trauma to America’s actions in a global arena. In this panel she will present her work side by side with Allen Grane, a First Lieutenant in the New York Army National Guard and researcher at the Council on Foreign Relations, where they will discuss their different approaches to facilitating these dialogues, and share their experiences working with both military and civilian communities.
About Brookie Maxwell

Brookie Maxwell is an artist and founding director of Gallery 138 in New York City. At Gallery 138, Maxwell produces solo and group exhibitions, presentations and dialogues, working in partnership with museums, corporations, governmental organizations, and NGOs. Since 2011 Maxwell has been working with deployed soldiers returning from the Iraq and Afghanistan, wounded warriors recovering from PTS, TBI and amputations, and veterans, and their families. In 2014 she was invited to be an artist in residence at the USO Warriors and Families Center in Fort Belvoir, where she interviewed wounded warriors and their families.

About Allen Grane
Allen Grane is a 1st Lieutenant in the New York Army National Guard. He currently serves as an assistant operations officer for the 1-69th Infantry Battalion. His previous assignments include serving as the mortar platoon leader, heavy weapons platoon leader, and as an armor platoon leader in the 30th Heavy Brigade Combat Team. His additional duties have included serving as the 1-69th Battalion’s liaison officer, sniper employment officer, and as the battalion battle captain. He currently works for the Council on Foreign Relations as the Africa policy studies research associate and has worked as a consultant for several non-profit organizations.

Parallel Fields is a discussion series that pairs an artist and a non-artist, both of whose work is socially engaged, to discuss with an audience how different professions are connected.